Out and proud Canadian actor Elliot Page (Juno, Inception) and his gay best friend, Ian Daniel, set off on a journey to explore LGBTIQ cultures around the world. In this Emmy award nominated first season from 2016, the duo travel to Japan, Brazil, Jamaica and the USA uncovering some of the more unusual aspects of international gay culture, as well as the challenges in the ongoing battles for equality

VICELAND – it’s a TV channel brought to you from Vice, the people behind the notorious Chemsex documentary of 2015. And now they offer a smorgasbord of more compelling viewing in shows such as F*ck, That’s Delicious, Bong Appétit, Balls Deep, Noisey, Hate Thy Neighbour and many more. Documentary style and immersive journalism covers the eating habits of rappers, cannabis themed dinner parties, social groups that spread hatred, and a cornucopia of even more edgy material. There are plenty of topics covered to keep even the most curious among us intrigued.

Although the channel is only available in the USA and Canada right now, expansion to the UK and France is already underway and more countries will be announced throughout the year. Until Australia appears on its map, we can benefit from many of the excellent programs available to stream 24/7 and for free via SBS On Demand.

Introduced as part of the programming launch for the new channel, the Gaycation series was born out of an idea from actor Elliot Page (Juno, Inception).

Co-president of the channel, award winning director, producer, screenwriter and actor, Spike Jonze (just quietly, he’s the dude who leads the dance troupe in Fatboy Slim’s Praise You music video) approached Page for input on what people might want to watch. He came up with the concept for a travel show with an LGBTIQ perspective. Jonze ran with it and suggested the concept would benefit from Page being joined by a companion, so he brought along Ian Daniel, a personal friend, art curator and fellow homosexual for the ride.

Nominated for an Emmy award in 2016, Gaycation was instantly destined for greatness. The show sparked mainstream media attention while filming at the Iowa State Fair. United States Republican Senator and strong opponent of marriage equality, Ted Cruz found himself being grilled by Page over discrimination against LGBT people. Video footage of the exchange went viral with ABC News capturing it.

Japan – season one, episode one

Japan: Gaycation isn’t your typical glitzy, gay travelogue. You won’t find recommendations on which beaches in Sitges and Mykonos have the best bums on display, or which trendy nightclub is best to be seen at… but if you’re curious to watch how a young man in Tokyo comes out to his mother and why he felt the need to hire rent-a-friends for the occasion, this show might be for you. Episode one delves deeper into being an LGBTIQ person living in and around Japan’s shame culture. Beautiful and contrasting moments occur when Page and Daniel get friend-married by a Zen priest at a Buddhist temple that offers same-sex weddings regardless of legal recognition, or lack thereof.

Brazil: This is not a show for the faint-hearted. In episode two, Page meets face-to-face with Brazilian Congressman Jair Bolsonaro, who he describes as “a major voice in the antigay movement in Brazil”. He confronts him on his previous statements to suggest parents should “beat the gay out” of their children. Later on, both Page and co-host Daniel nervously meet with a disguised, ex-cop and self-proclaimed killer of LGBT people. In a tense and emotional interview, the duo probe into his hatred only to have the situation intensified by discovering the man’s own son is gay. After consulting with the translator and production crew on their immediate personal safety, Page and Daniel choose to out themselves. As the tone of the interview becomes colder and more personal the pair are noticeably shaken by the experience.

Jamaica: Jamaica is a country with a long history of anti-gay politics and oppression. In episode three, despite the peaceful and welcoming nature of the Rastafari religion, Page and Daniel are shocked to discover a distinct lack of tolerance. In a rather difficult conversation with dancehall artist Beenie Man, Page confronts him about his violent anti-gay musical messages. The devastating effects of Jamaica’s predominant cultural beliefs are all too real for the trans and gender diverse community. Trans-woman Trina Bo$$ Bitch has survived being attacked with acid, shooting and beating. Although accepted by her family, it is other people who pose a threat to her life, forcing her to consider leaving the country for her own safety.

USA: The season finale focuses on the USA. Curiously, it was first broadcast the same day North Carolina Governor Pat McCrory signed a bill into law that removed local protections for the LGBTIQ community, marginalising many of the state’s residents as second class citizens. In a brief excursion to Saskatchewan over the border in Canada, the show’s hosts meet with indigenous people who identify as two-spirit. The title differs from typical Western definitions of gender and sexual identity and is used to embrace the notion of embodying both male and female spirits inside one person. Page describes how prior to colonisation and the introduction of homophobia, two-spirits were considered healers and blessed individuals. Visiting Iowa, San Francisco, Chicago and New York as well, they encounter a variety of activists and champions for LGBTIQ rights before finally ending up in Los Angeles to investigate how almost 40% of homeless youth in the city are LGBTIQ.

Edgy, raw and to the core, this is exactly the kind of immersive journalism we’ve come to expect out of Vice. Page and Daniel work wonderfully as facilitators for our journey, enhancing and never distracting from the occasionally brutal realities of the people we’re introduced to. If you feel like bursting your bubble and gaining a frank perspective on LGBTIQ life outside your usual comfort zone, all from the safety of your own living room, this is an absolute must see.

Orlando: Season two was commissioned last year following season one’s overwhelming success. Episode one is already available at SBS On Demand and follows Page and Daniel’s visit to Orlando in the wake of the massacre at Pulse gay nightclub, the deadliest mass shooting recorded in the USA to date. 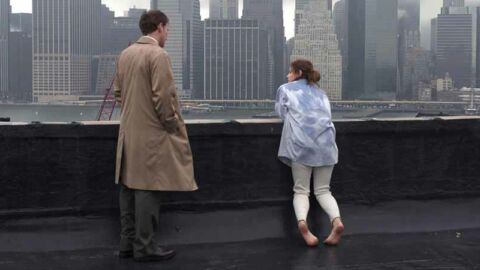