LGBTQ festivals and events are a chance to celebrate the community, support LGBTQ artists, performers and musicians, and — well — to let your hair down and have some fun!

Australia’s LGBTQ festivals are back and better than ever before. From Pride-filled parades to outback extravaganzas, here is our list of LGBTQ events to add to your calendar every single year.

In fact, in 2022, there were a whopping 194 events to choose from, spread across over 100 venues in Melbourne and wider Victoria. Midsumma Carnival and Melbourne Pride are two of the bigger events for all the community to come together and celebrate.

Midsumma is more than a festival too; Midsumma Futures and Midsumma Pathways are both programs run by the organisation providing mentorship opportunities for early-career artists and artists with disability.

Gaytimes Festival is ‘the camping music festival of your big gay dreams.’ Now THAT’S a tagline we can get behind. It takes place in February each year at Gilwell Park, Gembrook in the Dandenongs and State Forest, just over an hour’s drive from Melbourne.

Two must-do moments are Saturday’s Drag Race and Walk Off, and Sunday’s Doof Day. Dress to express yourself and bring along a doof stick!

Part of the experience is camping and you can either bring your own camping gear, hire what you need, or add a touch of class and go for a glamping experience. This is a truly must-attend LGBTQ event.

Steamy in climate, steamy in line-up — this LGBTQ festival takes place in sunshine-filled Port Douglas, Far North Queensland every February. With acts and events taking place in venues across the town, you can expect Vegas-themed shows, some of Australia’s best-loved drag queens, the hottest DJs, and plenty more.

Hot & Steamy Festival is a festival with a difference; it’s more than just music — there are long lunches, pool parties (we’ll give you one guess what the dress code is), and cocktail parties. But no matter what you choose, one thing is for sure. You’re going to have a LOT of fun.

Each year, Hot & Steamy announces its ambassadors with 2022’s ambassadors being Tim and Rod from Channel 10’s The Amazing Race, and one of the first gay married couples to appear on Australian reality TV after the Marriage Act law changed in 2017.

TasPride is the voice of Tasmania’s LGBTQI+ community and holds events throughout the year. But the main festival every February is where the real magic happens.

Celebrating all things queer, you can expect everything you’d want from a Pride festival — cabaret, comedy, culture, and an incredible Parade — all with a touch of unique Tassieness. There’s even a bake-off: The TasPride Cake Bake. Cake, parties, and parades? Sign us up!

Sydney Gay and Lesbian Mardi Gras takes place every year in February and March. There are hundreds of events to choose from in venues across the city. From comedy to cabaret and salsa dancing to speed dating, there’s something for everyone.

The festival culminates with the world-famous parade, traditionally down Oxford and Flinders Streets in the heart of Sydney. For the last two years, the Parade was held at Sydney Cricket Ground (SCG), but festival organisers predict it will return to the streets in 2023.

Now in its 44th year, this is a true explosion of glitter and glamour, with 160+ floats, and 6,500 people marching to celebrate our rainbow community, and stand up for LGBTQ rights.

It’s been described by Urban List as ‘one of the wildest, most colourful nights in Sydney’s cultural calendar’, and we couldn’t agree more.

Each year, LGBTQ favourites 78ers, Dykes on Bikes, and First Nations representatives take part, alongside a star-studded line-up of guests. Grab some biodegradable glitter, get yourself a ticket, and come and join one of the best events in the LGBTQ event calendar.

Not sure how you’ll make it through next year’s Mardi Gras and World Pride with all of these fabulous events? We’ve got you covered with tips to see you through to the other side of Mardi Gras weekend.

There are 50+ activity ideas to choose from including the Carnivale, the Poof Doof After Party, the Pool Party, and the pièce de résistance, the ChillOut Street Parade. There are also community hikes, tea dances, photography exhibitions and more. There is something for everyone, with a huge amount of activities free to attend.

Camping options start from around $15 per night, or there are plenty of places to stay in town and surrounding areas.

From its humble beginning in 1997, ChillOut Festival is now recognised as a culturally important and nationally celebrated LGBTIQ pride event, supporting and representing queer regional people. We’ll see you there!

A unique showcase of drag, culture, and cabaret, FabALICE celebrates the diversity of the Red Centre in all its rainbow glory.

This has got to be one of the most unique queer event-line ups out there. You can expect lip-synch battles, Sing-A-Long-A Sound of Music, gender and diversity training, after parties, Drag Queen storytime and more.

The pinnacle of all the events is the iconic Gala Under the Stars. In 2022, the headline act was none other than the human disco ball known as Kylie Minogue. Sadly, FabALICE was postponed until March 2023 due to COVID. But the good news is that it gives even more time to practice those iconic Kylie dance moves ahead of the big event.

Now in its 22nd year, Big Gay Day is one of Brissy’s biggest queer festivals. Welcoming thousands of LGBTQIA+ community members and advocates every year, you can expect live music, drag, burlesque, bingo and so, so much more.

Some incredible acts have graced the Big Gay Day stage, including icons such as Boy George, Sporty Spice and The Veronicas. 2022’s line-up featured Courtney Act, Vanessa Amorosi, and Faker.

There’s no onsite camping, but the team at Big Day Out have secured a 15% discount at Ovolo Fortitude Valley. A night of luxury and a day of epic street-partying. Now that’s a win-win.

The crew recently changed the festival dates (there’s also one in the Kimberley) to align with World Pride. The celebration lasts more than a weekend with parties, cultural, and art events happening from the first weekend of June.

The Northern Territory has to be on every Aussie’s must-see list at least once in their lives, and tying it in with a colourful celebration of all things queer, will make it even better!

This Priscilla, Queen of the Desert inspired festival takes place in the red sands of Broken Hill in the NSW outback. But trust us, Broken Heel Festival is worth the drive. This disco, desert, and divas themed spectacular features headline performances from Australia’s best showgirls, drag queens, drag kings and DJs.

With three stages all paying homage to cult movie The Adventures of Priscilla, Queen of the Desert, you’ll wonder how you’re going to fit it all in. One thing you definitely shouldn’t miss is the Main Drag in Drag street parade, where the whole Broken Hill community gets involved. There are more feather boas, glitter, and laughter to last a lifetime.

And the even better news? You can still grab some tickets for 2022, with the festival taking place from 8-12 September. Book yourself a glamping experience for a truly faaabulous time.

Canberra’s major Pride event, SpringOUT is a month-long spectacular that celebrates Australia’s LGBTIQ-friendly capital city and its LGBTIQ community in all its fabulous diversity.

One look at the line-up and it’s clear there’s no time to be bored here. Want to try queer Zumba? No problem. Film festival more your thing? Looking for a night of decadence and debauchery at a burlesque night? However you like to spend your time, SpringOUT has you covered. Located in venues across Canberra there are plenty of accommodation options available too.

Taking place in the city’s iconic Hyde Park, Perth’s PrideFEST celebration features two main parts — Fairday and Parade. During Fairday you can expect live music, cabaret acts, great food, and LGBTQI+ artists, allies and supporters celebrating together from across the state and beyond.

But the parade? Now that’s the real crème de la crème. Featuring hundreds of people, the parade is a feast of colour, culture, and community. Like all good events, it ends with a bang — with an epic firework display.

This queer-stravaganza has been happening for the past 25 years, providing a safe and inclusive place for the LQBTQ+ community to express themselves through art and culture.

From cabaret to comedy and theatre to film, Feast has something for everyone. Leather and kink, sporting events, live music, playwriting workshops…the list goes on.

Artists visit from all over the world to take part in Feast, with past acts including Conchita Wurst from Eurovision, adult film and trans activist Buck Angel, and Aussie icon Danni Minogue.

Located in Adelaide, you’re spoilt for choice when it comes to places to stay; with everything from basic motels to 5-star ooh-la-la available. 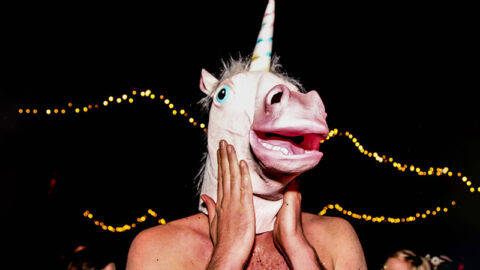 How do they celebrate Pride in the Northern Territory? This year I was lucky enough to find out.