Wondering if Sydney is gay friendly? Well, the answer is hell yes!

In fact, Sydney has long been known as one of the most gay-friendly cities in the world, with a huge annual Mardi Gras festival, a host of Pride events, and a gay scene diverse enough to keep every member of the rainbow family happy.

From epic gay club nights to drag queen bottomless brunches, Sydney’s gay scene has it all. And with WorldPride coming to Sydney in 2023, you’re gonna want to know how to make the most of a visit to the Harbour City. Let’s take a look!

Where is the gay scene in Sydney?

The whole of Sydney is LGBTQ+ friendly, but there are definitely a few stand out locations if you’re thinking of heading to the city for a visit.

Keep an eye out for the rainbow stickers (you’ll see loads of them along Oxford Street and King Street). These are ‘Safe Space/Welcome Here‘ stickers that show somewhere is particularly welcoming to the gay community.

Although Sydney’s very welcoming in general, these stickers are a great way of knowing you’ll definitely be in for a fun night and likely to meet some fellow queers out for a good time.

if you want to be right in the heart of Sydney’s gay scene, inner-city Darlinghurst is just 10 minutes from the CBD and is the perfect place to while away a weekend (or longer). Neighbouring Surry Hills and Potts Point have bustling gay communities too.

You’ll find gay-friendly bars, hotels, clubs, cafes, shops and more all over the neighbourhood, but the main action happens in and around Oxford Street. A walk along Oxford Street gives some real Pride vibe; drag queens, feather boas, and plenty of fabulous to go around no matter what time of day it is.

Quirky Newtown has a boho vibe all of its own with street art, live music, vegan restaurants galore and plenty more. It’s a place where artists, musicians, and plenty of the gay community mingle over craft beer, vintage shopping, and community markets.

It might be slightly calmer than Oxford Street. But Newtown — especially the main area of King Street — still comes alive at night, packed with live music and dance parties that go into the early hours.

Where to drink — gay bars Sydney

You’ll find plenty more queer entertainment venues in and around the city, but here are a few of our favourites.

The Bearded Tit in Redfern is a must-visit. Described as ‘A place for rebels and fluro beasts, where hard love and tender freaks rule’, this quirky place has a tasty cocktail menu and an ever-changing gallery of local art on proud display.

Named after the original Stonewall Bar in New York (where the historic Stonewall riots took place in 1969), Sydney’s Stonewall Hotel is located in Darlinghurst. It’s a gay institution with something happening every night of the week. If you like your nights Big (with a capital B), this is the place for you.

This art deco beauty beats with the pulsing heart of a neighbourhood pub. The Beresford is well-known in Sydney’s gay scene for the long-running Sunday social event: Beresford Sundays. It’s an opportunity for LGBTQ+ folks to mingle in a safe space. The venue has everything you need: a kitchen serving wood fire pizza, an outdoor garden and an upstairs nightclub. There really is something for everyone at The Beresford.

Located in Erskineville, The Imperial is a sheer gay, glitter-filled delight. Take part in Drag & Dine at Priscilla’s restaurant. Party till the AM in the late-night sanctuary known as The Basement, or get your game on at weekly trivia or drag queen bingo. Whatever you’re into, The Imperial has you covered.

Formerly the Midnight Shift or ‘The Shift’ as locals called it, Universal is the place to go on Oxford Street. Universal hosts the popular drag event Slay 4 Pay each Wednesday, hosted by popular drag talent Charisma Belle and Carmen Geddit! On weekends you’re spoiled for choice. Enjoy DJs in the bar or venture upstairs for spectacular dance events.

This iconic Sydney venue is located next to Taylor Square in Darlinghurst. Boasting a menu with pub classics and entertainment most nights of the week, you’re sure to make memories at The Oxford Hotel. There are three floors of entertainment for you to explore on Friday nights and weekends. Enjoy an alfresco meal and drink, head upstairs to Ginger’s for drag shows and dancing, or descend into the Oxford Underground for a whole range of pumping events.

Where to eat — gay cafes and restaurants Sydney

You’d be hard pushed to find a cafe or restaurant in Sydney that isn’t gay friendly, but for some super gay vibes head check out these brunch spots.

Located at the Prince of York on York Street every Saturday from 12-4pm. Be entertained by some of Sydney’s finest drag queens whilst enjoying a bottomless indulgence of proseccos, rosé spritzes, negronis, margaritas, wines or beer. Sign me up!

There are gay-friendly cafes all over Darlinghurst but the Rusty Rabbit is the crème de la crème. Especially if you like your coffee and all-day breakfast served by some of the best-looking barmen in Sydney.

Where to play — things to do in Sydney

Looking to get lucky while in town? Check out our guide on how to up your chances of picking up at a gay venue! Find our complete guide to sex venues across the country in Australia’s best gay saunas and sex-on-premises venues.

Remember that enjoying a fulfilling sex life also comes with the need to look after your sexual health — for your sake and your partners’. If you’re in Sydney and need to get a test or access treatment, sexual health services are available. Check out our interactive map to find services near you. For other LGBTQ+ friendly health services, check out this article.

If you’ve had a possible exposure to HIV, accessing PEP within 72 hours can help you stay HIV negative. Here’s how to access PEP in Sydney.

Free condoms and lube come as standard in all good sex venues — and 357 is no exception! But visit 9 times and your tenth visit is on the house. The space bills itself as all races, ages and sizes welcome, and Trans Tuesdays make the venue even more inclusive.

The venue is split across two levels with plenty of cruising areas, a cinema room, café, spa, sauna and steam room. Sydney Sauna really is how to do sex in the city, Sydney style!

This gay and bi cruise club features three levels of adult adventure and is located in Rydalmere. It’s way outside of the CBD but well worth the extra travel. If you’re asking yourself ‘where can I meet gays in Sydney?’, head here on a Sunday to enjoy the men-only night.

TRADE is a huge cruise club, bar, restaurant and nightclub over four floors located on Crown Street in Surry Hills. Fun times are guaranteed, and it’s a great place to meet gay men in Sydney.

While the city’s gay sex venues offer some comfort and privacy, for the more adventurous, be sure to explore some of these best gay beaches in Sydney.

Check out some of Little Ones Theatre’s shows to support the queer theatre community. Little Ones puts on shows as varied as Oscar Wilde and Bram Stoker to Charles Busch and Christos Tsiolkas — all with a touch of camp flair, of course.

The Dendy Cinema in Newtown is part of one of Australia’s leading independent cinema companies. If you love independent films curated for quality rather than quantity, Dendy is for you. The Dendy in Newtown is well known for screening LGBTQ+ films and is a beloved queer-friendly venue.

Located in the vibrant heart of Paddington, Palace Verona offers a mix of international and Australian cinema. Its schedule also includes Palace’s famous film festivals! The cinema is easily accessible by bus or a short walk from Kings Cross and Museum stations.

The big one we can’t wait for is WorldPride, the annual global LGBTQIA+ festival that’s been staged since 2000 in different cities across the world.

Check out our guide to LGBTQ festivals in Sydney and across Australia for other party events you won’t want to miss.

Where to stay — gay-friendly accommodation in Sydney

Heading here for a visit during WorldPride? Stay in the CBD, in the Eastern Suburbs (Coogee, Randwick or Bondi are all ideal), North Sydney, or the Inner West, to be close to the action. Prices depend on the kind of accommodation you’re willing to stay in, and Sydney has no shortage of options from hostels to 4 and 5-star hotels.

The general rule of thumb when it comes to hotel accommodation in Sydney is it gets cheaper the further out you are from the CBD. If you’re within a 20-minute train or bus ride, you’re in good stead to easily get back and forth from Sydney’s gay hotspots.

There’s no shortage of Airbnb’s in the CBD and surrounding suburbs if you’d rather enjoy the comforts of home over a hotel. Surry Hills, Darlinghurst, Redfern, Woolloomooloo, Potts Point, Paddington and Bondi are some popular areas you may want to consider. You can also check out the popular misterb&b for a range of LGBTQ-friendly accommodation options.

If you’re on a tight budget, there are a range of accommodation options available to you in inner city suburbs. Find hostels and capsule hotels on George St in Sydney, as well as around Kings Cross, Elizabeth Bay and Potts Point.

So, there you have it. The guide of where to eat, drink, play and stay in Sydney for gay men. What would you add? 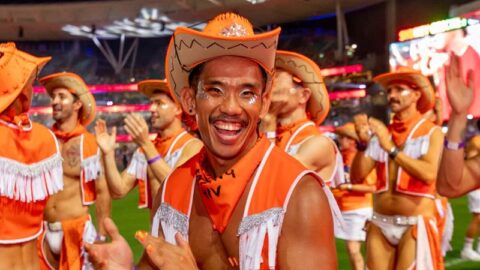