Forget star signs! The true way to discover what your potential partner is really like is through his Grindr bio. If you’re tired of the daily grind and bored of starting conversations that go nowhere and accomplish nothing, fear not, we break down how to sift through the incompatible, and click on the guys that are right for you.

They say you should never judge a book by its cover, but that was before guys migrated online to find their next hook up. I’m here to tell you that you can learn a lot from what someone chooses to share, or doesn’t chose to share, in their dating app profile.

Here’s my foolproof way of hitting up your perfect match each and every time. (Note: this list is totally not foolproof, and only a fool would trust it).

If you’re up for a laugh, you’ve found your comedy partner with this guy. Anyone who leads with a joke probably doesn’t take life too seriously and is more likely to be up for a bit of fun, rather than a dinner date discussing the delicacies of discourse in Dante’s Inferno. Stick to Homer, The Simpsons’ Homer.

You’re diving into a world of unknown with this one. If he has not invested enough time to include information in his bio – no stats, no preferences, nothing – then the chances are he’s probably not going to provide much in the way of conversation.

He’s either looking for a quick hook up, or to kill time, or he might be a married guy dipping his toe into the world of the Grind. If he doesn’t have a profile pic either, then this guy is most certainly on the down low, which can be hot, but prepare for major flakiness.

Buckle up, this gent has taken the opportunity to immortalise his life, likes and dislikes in 500 words or more. Not only are you in for deep conversation, but be prepared to engage with someone who enjoys talking about themselves.

On the up side, if you’re looking for an easy way in, you’ll have more than a few conversation starters provided you’re up for a little bedtime reading.

The sexual racist is not afraid to shout about what he doesn’t want, whether that offends anyone else or not. An instant block for me.

Trying to explain how this language reinforces stigma and negative stereotyping is another approach with this Neanderthal, if you can even be bothered, but it’s my guess nuance will be lost on this one.

“Start your conversation with a quote from Family Guy”

When a bio has a stipulation of how to begin a chat, he could be more anally retentive than the “quirky, fun guy” he is trying to be. Also sometimes disguised as the person who writes; “Don’t say hi, or ask how I’m doing”. Girl, its Grindr, get over it. “Hi” has been a standard salutation in the English language for centuries; you’re not going to change that with a bio on a hook-up app.

Let’s all give this guy a round of applause, he’s just single-handedly personified the stigma associated with HIV and testing in 15 characters or less.

The last time I checked, ‘clean’ meant that you’ve showered, not that you’re HIV negative. If it did mean that, then the assumption is people living with HIV are dirty, and that is just stupid.

Drug and Disease Free; which drug, what disease, are any of us really free? If they are talking risk, we know people with an undetectable viral load are classed as non-infectious, are we in or out? The world is too big and beautiful for such narrow definitions.

Truthfully, you’re only 100 per cent sure that you’re negative or STI free from the date of your last test — notwithstanding the window period! So, bitch please, pipe down and put the date of your last sexual health test instead. Test more, treat early, and ask the same of your partners without judgement, simple.

Does what it says on the tin, and normally accompanied with a picture of a houseplant. Expect a short exchange involving questions of where, when and how, proceeded by a hasty blowie, a rough fumble, and a quick shoot. Do not expect a great conversation as house plants don’t have personalities but a root around in a bush can be fun.

“Chat to me, please”

Desperado, come back to your senses. This guy needs a long, cool, drink, because he is thirsty. If you are looking for a round-the-clock message exchange that goes something like “how are you?”, “how are you now?”, “it’s been five minutes since you’ve responded, are you okay? HOW ARE YOU?” then you’ve found your perfect true love. Proceed with caution and notifications turned off for sanity.

“Masc for Masc only”

Oh bless, this handbag swinging, gym bunny thinks he is so masculine with his hairy chest and perfectly preened pubes. Above all else, he craves the smell of a musky man, able to grunt his way through broken conversation, praising himself on just how manly he really is. Not for the faint of heart, or anyone who believes that true masculinity is more than a simple binary concept limited by preconceived ideas of brawn, brooding and beefiness.

The golden gays of Grindr. These guys know their status and which prevention strategies they’re going to use to maintain it, whether it’s HIV+ undetectable ‘[+u]’, negative on PrEP ‘[-p] or HIV equal ‘[=]’.

Often not afraid to talk openly about what they want, in and out of the bedroom, these guys are more likely to be up for fun, and down for whatever, as long as it’s safe, sane and consensual. 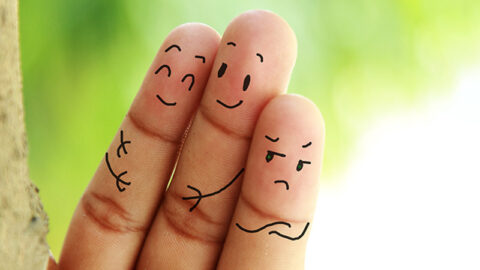 Contrary to what you might think, your jealousy function doesn’t get switched off when you start a non-monogamous relationship.

There are plenty of ways to stay close, even when you can’t be together.

On the gay dating scene? Here are seven things to avoid so you don’t send guys running!