Sex can be a lot of fun! Having the language and knowledge to talk about it, and do it safely, can maximise everyone’s enjoyment, no matter how many players are involved!

In Australia, we use the term STI, not STD, because ‘diseases’ tend not to be treatable and are usually defined by symptoms, whereas ‘infections’ are possible to treat and don’t always have noticeable symptoms. And, the good news is, most common STIs are treatable (for example, chlamydia is treated by antibiotics, and so are gonorrhea and syphilis).

We also choose not to use the word ‘diseases’ as there’s a huge amount of stigma attached to it. Stigma associated with STIs can stop people from seeking help or feeling safe to have discussions with sexual partners. Given how common STIs are, we reckon it’s time to say goodbye to any stigma or shame.

Although these terms are sometimes used interchangeably, HIV and AIDS are not the same. HIV stands for Human Immunodeficiency Virus and is a virus that attacks the infection-fighting cells in the body, making that person vulnerable to other infections and diseases.

AIDS stands for Acquired Immune Deficiency Syndrome. This can happen when untreated HIV weakens the immune system to the point it can no longer fight infections. HIV is the virus that causes AIDS, but people with HIV rarely develop AIDS in Australia.

This is thanks to the huge advances in HIV treatment medication. The treatments used today – although they can’t yet cure HIV – manage the virus to such an extent that people living with HIV can live a full and healthy life.

Sexual health testing also plays a huge role in making sure guys know their HIV status and can access the right treatment and care as early as possible.

PrEP (pre-exposure prophylaxis) is a medication (tablets) that HIV negative people can take to protect themselves from HIV. When used as advised, PrEP is extremely effective at preventing HIV — even when condoms aren’t being used.

PrEP isn’t for everyone but can be an excellent choice for guys looking for peace of mind and to maximise their protection against HIV.

PEP (post-exposure prophylaxis) is a course of medication (tablets) you can take to prevent HIV after a possible exposure to the virus.

This might be because a condom broke, came off, or wasn’t used, and you’ve had sex with someone whose HIV status you don’t know.

For PEP to work, it’s best started within 72 hours of exposure, and ideally as soon as possible.

For people living with HIV, having an undetectable viral load means the amount of virus in their body has been reduced so low that it can’t be detected by HIV tests.

This doesn’t mean someone is cured of HIV, but being undetectable does mean that even if someone is HIV positive, they can’t sexually transmit HIV to their partners. Yep, you heard that right!

Using HIV treatment to sustain an undetectable viral load keeps someone healthy and comes with the added bonus of protecting their sexual partners from HIV too.

UVL is a game-changer and makes sex so much safer for all.

You might even see guys talking about their HIV status on dating profiles. Some apps make it easy to disclose this, and you might see guys add symbols to their profiles such as +U or U=U (Undetectable = Untransmittable).

Check out how to decipher his profile and smarten up your own in Five ways to lower your Grindr dating bounce rate.

While there is currently no cure for HIV, antiretroviral treatment (also referred to as antiretroviral therapy or ART) involves using medicines that treat HIV to keep the virus under control.

A lot has changed when it comes to treatment of HIV. Modern antiretroviral medicines are safe, effective, and usually without side effects. These medicines mean that people diagnosed with HIV can now live full and healthy lives. In addition, people on effective HIV treatment cannot pass on the virus.

As ways for HIV-negative people to avoid getting HIV, PEP and PrEP both make use of antiretroviral medicines too.

The window period is the time between when you’ve been exposed to an STI, such as HIV, and when it’s possible to detect in your body through a test.

Did you know it can actually take some time before an infection shows up in your test results? So if you’ve been exposed to something, it might not show up right away. This is one reason why it’s best to test on a regular basis. For all guys into other guys (cis and trans), test for HIV and other STIs at least once every three months.

Depending on the type of HIV test used, it can take up to 12 weeks to detect after exposure — some types of HIV testing may be able to detect HIV sooner. HIV is highly infectious during the window period. HIV transmission often occurs during this time because people simply don’t know they’re HIV positive yet.

The window period for other STIs can vary between a few days to 12 weeks depending on the STI. Discover more about window periods and what this means for you in Could I still have an STI if my results were all negative?

Have you done a Rapid Antigen Test for COVID-19? Well, HIV Rapid Tests and HIV Self Tests are similar. They’re HIV tests that give results in just 15 minutes!

The main difference is that instead of saliva or a swab, HIV Rapid Tests and HIV Self Tests use a tiny finger prick to test for HIV. Don’t worry though, it’s not painful. Just a quick pinprick and it’s super easy to do.

HIV Rapid Tests and HIV Self Tests are similar ways to test for HIV. You can get an HIV Rapid Test at a dedicated or pop-up testing service. A trained peer community member performs the test with you. HIV Self Test kits are devices you can buy to test yourself in the comfort and privacy of your own home.

You can even order a test for free if you’re in NSW. To find out about free HIV test kit vending machines in some other states or to get your hands on an HIV self test kit anywhere in Australia, check out this article.

Going down, blow job, giving head. Whatever you call it, oral sex means pleasuring someone’s cock, vagina or front hole with your mouth and tongue. Try a flavoured condom for something fun — condoms are also a good way to help prevent STIs during oral sex.

Oral sex is a very low risk activity when it comes to HIV transmission. The risk of HIV and other STIs can increase if there are sores or cuts in the mouth.

Condoms are a great way to help reduce the chance of coming in to contact with an STI. While they’re great for reducing the risk of STIs, they don’t eliminate that risk entirely — condoms don’t always cover affected areas of skin, they don’t always get used for oral sex, and some STIs can spread through kissing.

The term barebacking originally meant riding a horse without a saddle. That in itself is a bit wild, fun and perhaps a bit dangerous. Which is perhaps the connotation queer culture wanted to convey when the term became more popular (and taboo) during the peak of the HIV/AIDS epidemic.

Today, the risk of getting HIV from condomless sex can be avoided thanks to tools such as PrEP, an undetectable viral load, or PEP when it’s needed.

Condomless sex increases the risk of STIs unless you know each other’s sexual health status (and trust it implicitly). The good news is that there are plenty of condoms available to choose from (ribbed, coloured, flavoured, textured) which can make sex even more fun.

Have no fear though; it’s possible to get your rim on safely. Make sure your/their ass is as clean as possible (douching can help here).

A Sexual Health Clinic or Centre is a safe, confidential, and supportive place where you can go for sexual health advice and testing for HIV and STIs. They’re usually set up a bit like a regular doctor except they specialise in sexual health.

There’s no stigma, no judgment, just the help and support you need to have a healthy and fun sex life. There are sexual health services in every state and territory across Australia. Check out our interactive map to find one near you!

All of these sexual identities are common and valid forms of sexual expression, intimacy and pleasure.

These terms have been around for many, many years but you can take your time exploring your sexual identity to figure out what you self-identify as. And remember, you don’t need to confine yourself to any label if you don’t want to. Your sexual likes and dislikes are your own, and you can change your mind, try new things, and take as long as you need to figure things out.

If you’re a gay or bi guy having sex, knowing these common terms, what they mean, and how to have conversations can help you look after yourselves and your partners. What other terms would you add to the list?

With gay and bi guys disproportionately affected by this rare virus, what does it mean for you?

As a gay or bisexual guy, you’ve got some unique health needs – particularly when it comes to sexual health. 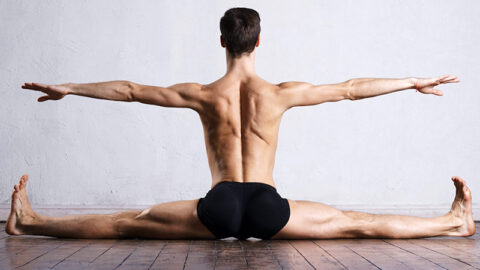 Let’s get to know your pelvic floor, so you can develop a whole different kind of inner strength.